Interview with Will Collum

How did you first get involved in meditation?

A couple of things colluded to set a stage that made the actual beginning meditation very easy: The destruction of my marriage intensified my desire to find a way of looking at and relating to the world that made sense to me. My chronic inability to find a satisfying spiritual life within Christianity coupled with a distaste for the church politics and the like made me ripe to look elsewhere.

Looming in the background was my older sister who had, in recent years, been delightfully transformed by, among other things, her Zen practice of around ten years standing. The final background element was the purchase of a copy of the Tao Te Ching almost twenty years prior that had introduced me to and intrigued me with an Eastern way of thinking. These things were all on my mind at the end of 2006.

A rock was pushed over a cliff when a Zen book showed up in the house as a Christmas present for my children's mother. I borrowed and read it and was amazed. It was as if my own thoughts had been written down by someone else. When it described meditation, I thought, I can try that right here and now. With no cushion or bench, a couple bricks and a board were pressed into service, and I went out onto the patio under the deck. (The house is a 70's seen-one-seen-'em-all A-frame) I took a timer, not to ring and stop the sitting, but to see how long I sat. I mentally targeted ten minutes. 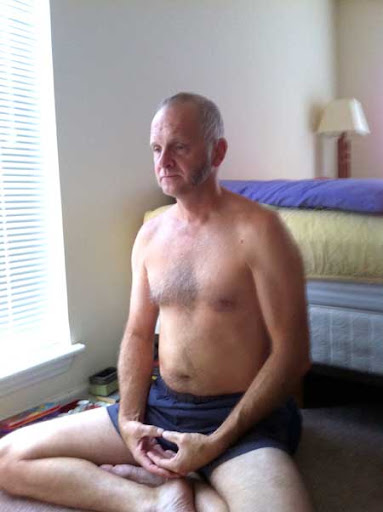 Following the description in the book, I sat on the makeshift bench and began what I would later know as shikantaza. When I came out of it around seven or eight minutes later I knew I was spiritually home. Something clicked, just like that. And so I began sitting every day outside under the deck in the cool South Carolina winter, moving in when it got warm and buggy. Eventually I was sitting thirty minutes once a day.

It may not be quite as big a shift as one might think. Sometime in 2007, it fully dawned on me that I did not, and indeed, could not believe some of the things that, more or less, one is required to believe to call oneself a Christian, and that no amount of deciding or effort was going to change that. Additionally, I realized that I actually never had. One of the ideas that my mind would not sit still for was an externalized, interventionist God. I simply didn't buy it.

Now that was troublesome, having been raised a Christian, and it took some time to actually admit what I had already realized because of fear of damnation inculcated since childhood in the church. Once that admission was made, though, I let go of Christianity. I decided that I wanted a spiritual life that would work for me, not the other way around, and for the first time felt free to look outside the faith I was brought up in.

At that point, moving to Buddhism was easy for a couple reasons. First was that Buddhism seemed simple- which is not to say easy- and logical. Secondly, I was not asked to believe things that I could not. Everything was empirically testable. These things appealed to me deeply. Regarding an internalized God and Source, I find I'm not very interested in the questions "Where did I come from?" and "Why am I here?" When I made the shift, I needed something that was present and useful in a pragmatic way. I was more interested in "What do I do now?" I still am.

Check out the original copper pyramid
for enhancing Meditation Practices.